Sarah Crossan and Brian Conaghan are two authors whose books have blown me away. They are also  both award-winning authors, with Sarah Crossan’s One winning the Carnegie Medal and Brian Conaghan’s The Bombs That Brought Us Together winning the Costa Award. When I first heard that they were joining forces to write a verse novel I knew it was going to be an amazing read. We Come Apart is everything I hoped it would be and more. 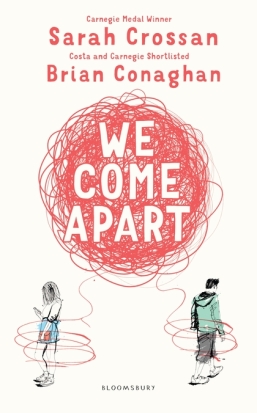 Jess would never have looked twice at Nicu if her friends hadn’t left her in the lurch. Nicu is all big eyes and ill-fitting clothes, eager as a puppy, even when they’re picking up litter in the park for community service. He’s so not her type. Appearances matter to Jess. She’s got a lot to hide.

Nicu thinks Jess is beautiful. His dad brought Nicu and his mum here for a better life, but now all they talk about is going back home to find Nicu a wife. The last thing Nicu wants is to get married. He wants to get educated, do better, stay here in England. But his dad’s fists are the most powerful force in Nicu’s life, and in the end, he’ll have to do what his dad wants.
As Nicu and Jess get closer, their secrets come to the surface like bruises. The only safe place they have is with each other. But they can’t be together, forever, and stay safe – can they?

We Come Apart is an unforgettable read that tore me apart and put me back together again. The characters voices are so genuine that you really feel for them.  I loved that the story was told in verse because it just works so well with this story. The verse brings out the raw emotions of the characters.

Each of the authors writes from a different point of view. Sarah Crossan writes as Jess, a girl who is trying to protect herself from her physically abusive stepfather. She hates her so-called friends but does what she needs to fit in. She got caught shoplifting and gets sent to the reparation scheme where youth offenders have to pick up rubbish and learn how to be useful members of society. It’s in the reparation scheme that she meets Nicu, a Romanian guy who has come to England with his family to earn money for his marriage. His parents are going to marry him off to a Romanian bride but he wants nothing to do with it. When he meets Jess he falls for her and knows that he can’t ever marry someone he doesn’t know.

The thing I liked the most about We Come Apart is that it’s a very real story. There’s no happy ending, where Jess and Nicu fall madly in love and desperately in love. It’s really a story of how two people find each other at the right time and are there to help each other get through the rough patches. It takes quite some time for Jess to see the good guy beneath the surface of Nicu and she certainly needs some convincing.

I really loved the ending because it wasn’t forced. You know things aren’t going to be all sunshine and rainbows but they’ll be OK.

I will carry Jess and Nicu around in my head and hear for quite some time. Grab We Come Apart and fall in love with these amazing characters too.