I’m a huge fan of Christopher Edge. Many of his previous books have had a science theme, from inter-dimensional travel to the laws of the universe. His characters, and the unusual situations they find themselves in, stick with you. Christopher’s latest book, Space Oddity, has all the things I love about his stories, with a good dash of humour mixed in.

Jake is always being embarrassed by his dad. Whether he is breakdancing at the school disco or making a surprise appearance as a rubbish Darth Vader at his school production, Jake’s dad just can’t seem to stop doing silly things. When Jake’s dad tells him that the two of them are going away for the weekend to spend some quality time together, Jake can’t think of anything worse. His dad takes him to a Dads and Kids Weekend Adventure, where they will spend the weekend doing fun activities together. However, when his dad embarrasses him in front of the whole camp, Jake is ready to pack it in and go home. Then, his dad tells him who he really is – an alien who crashed to Earth twelve years ago. Thanks to a special device, Jake’s dad has been able to disguise himself as a human and blend in. But, when Jake fiddles with the device, he inadvertently signals the Cosmic Authority. They appear out of nowhere and abduct his dad, taking him back to his home planet. Jake’s dad may be super embarrassing but he is still his dad, and Jake will do anything to get him back.

Space Oddity is an intergalactic adventure with a whole lot of heart and humour. There is something in this story for everyone, from stinky aliens and killer robots, to alien technology and a giant out-of-control Lego spaceship. It’s a story about family and the lengths that we would go to for the ones we love, even if they are super embarrassing. It’s part science fiction, part adventure, but there are also plenty of laughs. I especially loved the range of ways that Jake’s dad has embarrassed him in the past. It’s a slightly younger story than most of Christopher’s other books, but a great way to hook kids into this amazing author.

Jake is a really relatable character, whose voice I loved. Most readers will have a family member who can be embarrassing, so they’ll understand how Jake feels. Jake’s dad hasn’t been able to explain why he gets things so wrong, and when he tells Jake the truth, Jake has trouble believing it. Jake does actually love his dad though, and he can’t bear to think about losing him forever. Jake puts his own life in danger in order to try and save his dad.

The fantastic Ben Mantle has created the cover illustration and illustrations throughout the story. Whenever I see one of his covers I always pick it up, and his cover for Space Oddity is spectacular. The cover designer, Steve Wells, has added some nice touches, with the raised title and the shiny, textured bits on the spaceship.

Space Oddity would be a brilliant read aloud or class set for Years 4-6. It’s funny and action-packed, so it will engage everyone.

Christopher Edge’s previous book, The Many Worlds of Albie Bright was science fiction for kids at its best. Christopher effortlessly wove actual science with fiction into a story about a boy’s search for his mum across multiple dimensions. It is a fantastic book that the kids at my school have loved and I’ve certainly enjoyed discussing the story with them. Christopher’s latest book, The Jamie Drake Equation, is another brilliant science fiction story that readers young and old will devour.

How amazing would it be to have a dad who’s an astronaut?

Rocket launches, zero gravity, and flying through space like a superhero! Jamie Drake’s dad is orbiting the Earth in the International Space Station and Jamie ought to think it’s cool but he just really misses him…

Hanging out at his local observatory, Jamie picks up a strange signal on his phone. It looks like alien life is getting closer to home. But space is a dangerous place and when his dad’s mission goes wrong, can Jamie prove that he’s a hero too?

The Jamie Drake Equation tore apart my atoms, shook them up and put me back together again. It made me smile, broke my heart and left me in awe of the universe.  The story is narrated by Jamie so you really get inside his head and experience his sadness, embarrassment , heartbreak, wonder and awe.

Ultimately this is a story about a boy and his connection with his father who he just wants to return to him on Earth. Jamie’s dad is often away, training for missions or up in space, and Jamie and his family have had to live all over the world for his dad to achieve his dreams. Jamie really misses his dad and just wants him to be home, rather than talking to him on a screen. His dad’s latest mission is to launch nano-spacecraft in to space to look for signs of alien life. However, it’s Jamie who makes contact with an alien race when he accidentally downloads a transmission to the Hubble Telescope to his phone. Soon Jamie is discovering more about aliens and the universe than he ever thought he would.

Like The Many Worlds of Albie Bright, the thing I love most about The Jamie Drake Equation is the way that Christopher not only tells a fantastic story but also teaches you about the wonders of the universe. I never knew about things like a star’s ‘Goldilocks zone’, or that one of our closest stars, Proxima Centauri, is only four and a quarter light years from Earth. Reading this book made me want to desperately visit an observatory to look at the stars (something I’ve never done).  I’m sure Christopher will inspire kids to want to explore the universe too.

The Jamie Drake Equation is perfect for readers who love adventure, science and space, stories about families, or anyone who just loves a gripping story.   It would be a great read aloud for Years 6-8 as it will certainly grab kids (and teachers).  I wonder where Christopher Edge will take us next?

Christopher Edge is the author of many great books for kids, including the Penelope Tredwell books Twelve Minutes to Midnight, Shadows of the Silver Screen and The Black Crow Conspiracy.  Christopher’s latest book is the out-of-this-world, inter-dimensional adventure The Many Worlds of Albie Bright.  I absolutely love this book and you can read my review here on the blog.

I had some questions about The Many Worlds of Albie Bright that I wanted to ask Christopher and he has very kindly answered them for me.  Read on to find out if bananas are indeed radioactive, which Back to the Future film is Christopher’s favourite, and what’s the coolest thing that he has ever built. 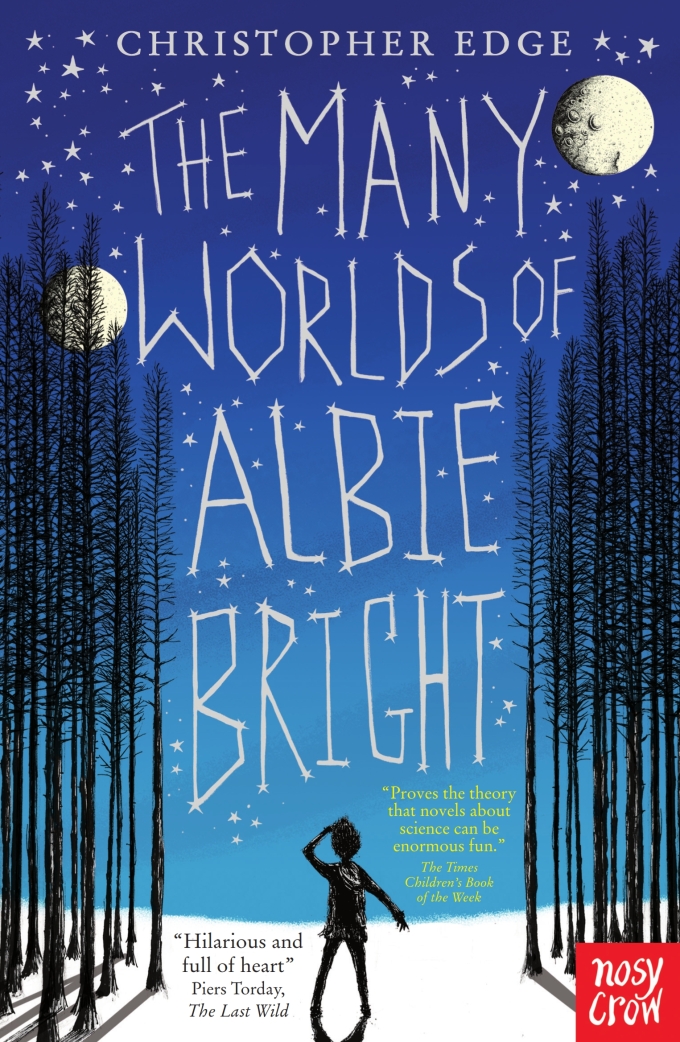 Lots of things! One of the sparks was a popular science book I read called How To Destroy The Universe And 34 Other Really Interesting Uses of Physics. It described cancer as a ‘quantum killer’ and explained how this disease is caused by a single-cell in your body mutating and going rogue. This got me thinking about the Many Worlds Interpretation of quantum physics which suggests that quantum events might happen in one universe but not a parallel universe, so I had the idea of a boy who might have lost his mother to cancer and how he might try to use quantum physics to find the parallel universe where she is still alive. From this spark I slowly built the story and thought about the different parallel worlds the boy might find and how his life might be subtly different in each one. When friends asked what I was writing, I told them it was like It’s A Wonderful Life, but with added quantum physics!

Back when I was at school, I got a grade D for GCSE Physics – so I’m not any kind of science whiz! But as an adult I’ve become fascinated by the wonders of the universe as expertly explained by scientists such as Brian Cox, Jim Al-Khalili, Michio Kaku and Brian Greene. The American physicist Richard Feynman once said, “If you think you understand quantum physics, you don’t understand quantum physics”, but thanks to a huge pile of books in my office by these and other expert authors, I’ve been able to pretend that I understand a little more than I did before I started writing The Many Worlds of Albie Bright. It was important to me that all the science mentioned in the book was real and accurately described, so I had the manuscript checked by a friend who’s a Professor of Particle Physics and also works at the Large Hadron Collider at CERN. Luckily he said it passed the test!

Amazingly, YES! All bananas contain potassium which is a natural source of radioactivity. This means that if you’re standing next to the fruit bowl in your kitchen and it’s got a banana in it, then every second you’ve got a chance of being blasted with a gamma ray of radioactivity. Don’t worry this is completely safe and won’t turn you into a radioactive banana-eating superhero! However, large shipments of bananas have been known to trigger false alarms when they pass through radiation monitors at ports and airports!

The first Back to the Future is obviously the best. In some ways I wish they’d have kept it at just one film as it’s just so perfect from start to finish, whereas I don’t feel that way about the second and third films. Having said that I do like the fact that in one of the parallel universes that Albie visits in the book there’s a cinema showing Back to the Future IV…

It’s funny, I spoke about this at the end of an interview I gave to Front Row on BBC Radio 4 and said that one of the things I like best about writing stories for young readers is that you have a fearless audience. Young readers aren’t a jaded audience – they’re an audience with high expectations, who will go with you anywhere if you can deliver on giving them a great story. And it’s a real honour to write for an audience like that.

To find out more about Christopher Edge and his books visit his website, www.christopheredge.co.uk.