I think books, rather than people, have taught me the most about empathy, particularly as an impressionable teenager.  They make me feel what the characters are feeling and help me to understand different situations. Dianne Touchell makes your heart break for the main character in her new book about a family dealing with Alzheimer’s Disease, Forgetting Foster. 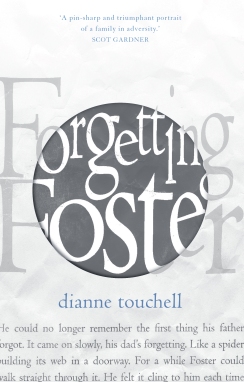 Foster Sumner is seven years old. He likes toy soldiers, tadpole hunting, going to school and the beach. Best of all, he likes listening to his dad’s stories.

But then Foster’s dad starts forgetting things. No one is too worried at first. Foster and Dad giggle about it. But the forgetting gets worse. And suddenly no one is laughing anymore.

Forgetting Foster is one of the most heart-breaking books that I have read since Morris Gleitzman’s Once.  It is Dianne’s lyrical writing and very real portrayal of a family dealing with Alzheimer’s Disease that makes the story so heart-breaking.  She takes us inside the head of 7-year-old Foster and we see his family falling apart through his eyes.  We experience Foster’s confusion and hurt as the father that he loves and looks up to starts forgetting things and changing completely.  We understand his anger at being treated like a child, even though he understands more than his family thinks he does.  The power of stories to bring enjoyment to our lives and help us to remember also plays an important part in the story.

Dianne’s writing is very lyrical.  I found myself stopping reading in many places just to soak up descriptions and savour images that she had conjured.  I especially liked the image that Dianne conjures when Foster and his dad are talking about phantom itches when someone loses a limb,

‘He imagined Dad’s profile, half a face that looked a bit empty lately, and felt a stab of ghost feeling.  A funny ache that told him the stories were still inside Dad somewhere, like an amputated foot that still itches.’

The way that Dianne describes the relationship between Foster and his dad in the start of the book gives you warm fuzzies.  Sunday is always a special day with Dad, when they make pancakes together and go into town, playing games along the way.  You can feel how proud Foster is of his dad and how much his dad loves him.

Stories play an important part in Forgetting Foster.  Before Foster’s dad got sick he would tell stories to Foster all the time and encourage him to join in.  Foster’s dad tells him that ‘there are stories in everything…They are all around you waiting to be discovered.  You just have to look for them.’ He also encourages Foster to tell his own stories to whoever will listen.  Foster’s mum had an accident when she was younger and his dad tells Foster a fantastic story about why she now looks different to other people.  Stories also play an important part in helping Foster and his family deal with his dad’s illness.

Although Foster is seven in the story, Forgetting Foster is not a story for 7-year-olds.  There are a couple of swear words which, although they are in the context of the story, may alarm parents.  I think good Year 7 and 8 readers would enjoy the story and it would make a great novel study for this age group.  Forgetting Foster is a book that I think all teachers, librarians and anyone who loves a beautifully-written, heart-breaking story should read.  I’m now going to hunt down all of Dianne Touchell’s previous books and will look forward to more books from her.