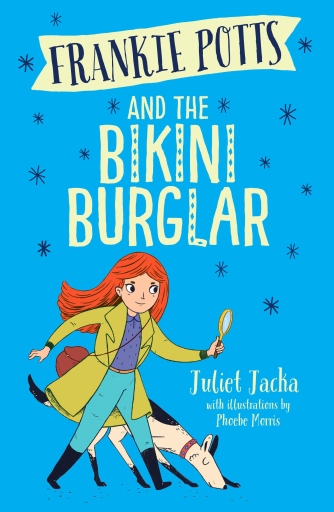 Meet Frankie Potts, the village of Tring’s number one girl detective.  She has flaming red hair, a questioning mind and an addiction to gobstoppers.  And she is REALLY good at solving mysteries.

Frankie Potts is the creation of New Zealand author Juliet Jacka.  She’s a new character that kids (especially girls) are going to love.  She’s inquisitive, confident and observant.  She has her eyes peeled for things that look unusual and out of the ordinary.  She carries a notebook everywhere with her and is always making lists of unusual things she sees and mysteries that she needs to solve.

In the first book in this fantastic new series, Frankie Potts and the Sparkplug Mysteries, Frankie finds a stray dog outside her favourite sweetshop and he follows her everywhere.  Her first mystery is:

She decides to name him Sparkplug and everybody seems to go gaga for him, especially her formidable Grandma M.  Her grandma starts to act stranger and stranger and so Frankie adds more and more mysteries to her list.  She sets out to solve them with the help of Sparkplug.

The excitement continues in the second book of the series, Frankie Potts and the Bikini Burglar.  Frankie is on the lookout for a human detective sidekick to join her.  It’s not an easy task, especially when she has to deal with the new boy at school, the mean office lady, her arch-enemy Ralph Peter-McGee and tracking down the burglar on the loose in Tring.

The Frankie Potts series is full of excitement, adventure and lots of fun.  The covers make the stories look really appealing, with Phoebe Morris’ wonderful illustrations on the cover and throughout the books.  The series is perfect for 7-10 year olds, especially those readers who like the Billy B. Brown series by Sally Rippin or the Friday Barnes series by R.A. Spratt.

Stay tuned to read a special guest post from Juliet Jacka and a chance to win the first two books in the Frankie Potts series.