Frankie Potts is the village of Tring’s number one girl detective.  She has flaming red hair, a questioning mind and an addiction to gobstoppers.  And she is REALLY good at solving mysteries. Frankie’s first two adventures saw her trying to solve a whole pile of mysteries including:

Frankie’s list of mysteries to solve is getting longer by the day. Firstly, her mum is acting very strangely – she’s tired, grumpy and feels sick all the time. And then there’s Grandma M, who keeps dropping hints about expanding her troupe of performing greyhounds: Tinkerbell, Titania and Tiramisu.

With her detective sidekick Mac, Frankie travels to Giggleswick to find out about the mysterious Gideon R. Best, Animal Trainer Extraordinaire, and why he sent a postcard – with two kisses on it – to Frankie’s mum. How can Frankie work out what an overweight donkey, a cuddle-obsessed pig and a pooing parrot have to do with anything? And why has Tinkerbell started to waddle?

Kaboom! Things are getting explosive in Frankie’s family. She had better start solving. 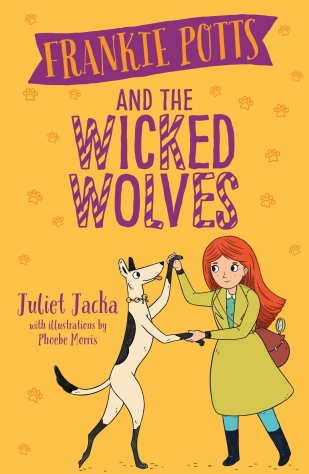 A band of dancers with bells and blue painted faces have come to Tring, and Frankie can smell a mystery. Who are these Wicked Wolves? How come Grandma M knows them, and wants to pick a fight with them?

Meanwhile, Tinkerbell and Sparkplug’s seven adorable puppies are causing chaos at Frankie’s house. Grandma M is planning to give away four of them, and Frankie and Mac must make sure that they go to good homes. Ralph Peter-McGee, Frankie’s arch-enemy, seems to have his eye on her favourite pup Kettle Thomson. Can Frankie stop Kettle going to the wrong home? And why are those Wicked Wolves sniffing around the puppies?

The Inaugural Tring Talent Contest is rapidly approaching, and Frankie has some serious detecting to do. But maybe not all the clues are quite as they seem.

I can’t get enough of Frankie Potts!  She is a wonderful character that kids, especially girls, will love.  She is really inquisitive and mysteries seem to follow her wherever she goes.  Naturally she needs to solve them and you just know that she’ll find the answers.  She carries a notebook everywhere so she always has a list of mysteries that she needs to solve.  I like the way that these lists are included in the story so that the reader can try to solve the mysteries too.

One of my favourite features of the Frankie Potts series is the design of them.  Phoebe Morris’s illustrations and the bright colours make the covers stand out and look really appealing to the target audience.  I also really love the alliterated titles which sound really cool (Postcard Puzzle, Bikini Burglar).

Get the Frankie Potts series into the hands of any young fans of a good mystery.  I think they would be a good ‘next step’ for fans of Geronimo and Thea Stilton and Billie B. Brown.  Once you’ve read one you’ll be hooked!