Reality television shows are made about just about anything these days. You can watch people survive on an island, housewives fight with each other or follow the exploits of a group of Kiwis on the Gold Coast, from wherever you are in the world. However, would you watch a man dying of a brain tumour as his family crumbles around him? Len Vlahos’ amazing new book, Life in a Fishbowl, shows us exactly what life would be like for a family in this situation. 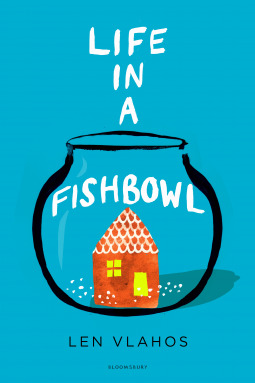 When Jackie discovers that her father has been diagnosed with a terminal brain tumor, her whole world starts to crumble. She can’t imagine how she’ll live without him . . .

Then, in a desperate act to secure his family’s future, Jackie’s father does the unthinkable–he puts his life up for auction on eBay. Jackie can do nothing but watch and wait as an odd assortment of bidders, some with nefarious intentions, drive the price up higher. The fate of her entire family hangs in the balance.

But no one can predict how the auction will finally end, or any of the very public fallout that ensues. Life as Jackie knows it is about to change forever…

I absolutely loved this incredibly powerful story!  Like a reality TV show, Life in a Fishbowl is addictive and entertaining, but this book will also make you stop and ponder the issues that it deals with.  What lengths would you go to to provide for your family if you only had 4 months to live?  How would you feel if someone you loved was dying and you couldn’t grieve in peace? How would you cope with people who want to twist and edit your words and feelings just to make better TV?  If the person you love asked you to help them die would you do it?

Like the house that the family Stone live in, with it’s multiple cameras and multiple points of view, Len Vlahos gives us many different perspectives of Jared Stone’s situation.  I feel that these different points of view set this book apart from your average YA read.  You get the perspective of Jackie, one of the teenage daughter’s of Jared, who is struggling to deal with her father’s illness and the constant cameras that follow her everywhere in the house.  However, you also get the perspective of Jared himself (who is quickly loosing his memories and control of who he is), the ruthless TV producer Ethan (who will do almost anything to keep his show running), Sister Benedict (a nun who wants to save Jared but has questionable morals) and Sherman Kingsborough (an immature millionaire who believes that money can give him everything he wants).  Then there is my favourite perspective of the book, Glio, the anthropomorphized glioblastoma multiforme (or brain tumour).  You watch as Glio gobbles up Jared’s memories with glee, giving you a taste of family life before Glio came along.  Glio becomes more and more adventurous and hungry for experiences as the book progresses, which ultimately means the deterioration of Jared.

Like any reality TV show you there are moments where you will be biting your nails, screaming at the characters, laughing with glee as a character you hate gets what is coming to them, and ultimately wanting to binge the whole book until you’ve reached the end. Rush out and grab Life in a Fishbowl now!