Interview with Mark Smith about The Road to Winter

Mark Smith is the author of the amazing new YA book, The Road to Winter.  I absolutely loved The Road to Winter, from the first page to the last!  It’s a thrilling story of survival in the aftermath of a virus that wipes out the population. Check out my review here.

I was thrilled to have the chance to interview Mark about The Road to Winter.  Read on to find out what he couldn’t live without, what inspired him to write The Road to Winter and what books you should read next if you like his book. 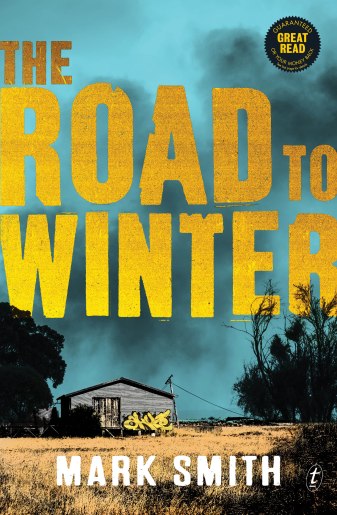 The Road To Winter (TRTW) evolved from a short story I wrote in 2013, entitled Breathing In and Out. When I decided to turn it into a novel I was determined to write a page turner that would engage younger and older readers alike. It is largely an adventure story told through the eyes of a sixteen year old boy – but it touches on a number of very relevant issues, including conflict, attitudes to violence, relationships, loyalty and the treatment of asylum seekers.

I’d like to think I would! The advice when writing is to “write what you know” and Finn’s understanding of the environment – and how to survive in it – is largely my own. He hunts, fishes, grows veggies and trades food. I think the hardest test Finn faces is the isolation – which, of course, is broken when Rose arrives in town in need of his help.

Coffee! I actually thought of weaving that idea into the story somewhere but it didn’t make the cut. When you are creating a dystopia there are lots of these decisions you need to make – what’s still there and what’s not. In TRTW though, I deliberately didn’t take a lot of time to explain the dystopia because I wanted it to be a character driven novel, rather than one dealing just with the consequences of living in a post-apocalyptic world.

Finn feels the loss of his family very deeply and I certainly would too. If I were forced to survive in a world like his, I’d want my family there with me to help!

As an outdoor education teacher I’m a huge fan of adventure non-fiction. I consume books about survival in extreme circumstances – Jon Krakauer’s Into Thin Air and Joe Simpson’s Touching The Void. Simpson’s story is an incredible tales of survival. I’d also recommend the account of Ernest Shackleton’s epic journey of survival in Antarctica in 1914 and Tim Cope’s On The Trail of Genghis Khan.

By 2014 I’d had more than twenty short stories published in magazines, journals, anthologies and newspapers in Australia. I learned my craft as a short story writer but I always wanted to write a novel. It took me 18 months to get the manuscript of TRTW ready to submit to a publisher. I chose Text because they have a strong reputation for supporting new writers. They loved the manuscript and offered me a three book deal. The sequel to TRTW is due for release in May 2017. I know the road to publication is a long and difficult one for most writers and I am incredibly thankful that mine was relatively smooth – but, in the end, it’s the quality of the writing that will decide whether your work is published or not.

It’s a really good question! I didn’t consciously write a YA novel – I wanted to tell a particular story in a particular way – through the eyes of a sixteen year old boy. I do think that we often categorise books by their protagonist rather than by what the story is saying and whom it may appeal to. I think TRTW will crossover into the adult reading market very easily – and Text have printed it in trade paperback format to encourage that. As you say too, it has the look of a gritty adult book – again, the cover design being part of the crossover appeal.

In writing TRTW I was influenced by reading a number of books – some obvious, some less so. The obvious ones are John Marsden’s Tomorrow series and The Ellie Chronicles. But I also enjoyed The Dog Stars (US) by Peter Heller, Clade by James Bradley and Jasper Jones by Craig Silvey.

The Road to Winter by Mark Smith

Sometimes you get that feeling when you start reading a book that you know you are going to love it.  Something about it, whether the characters or the tone of the story just clicks with you.  Mark Smith’s debut novel, The Road to Winter, is one of those books for me. 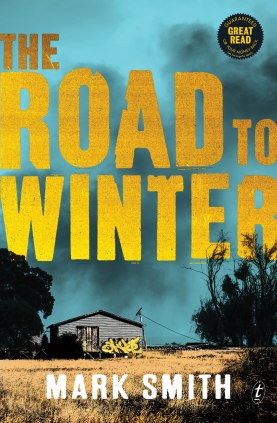 Since a deadly virus and the violence that followed wiped out his parents and most of his community, Finn has lived alone on the rugged coast with only his loyal dog Rowdy for company.

He has stayed alive for two winters—hunting and fishing and trading food, and keeping out of sight of the Wilders, an armed and dangerous gang that controls the north, led by a ruthless man named Ramage.

But Finn’s isolation is shattered when a girl runs onto the beach. Rose is a Siley—an asylum seeker—and she has escaped from Ramage, who had enslaved her and her younger sister, Kas. Rose is desperate, sick, and needs Finn’s help. Kas is still missing somewhere out in the bush.

And Ramage wants the girls back—at any cost.

I absolutely loved The Road to Winter, from the first page to the last!  It’s a thrilling story of survival in the aftermath of a virus that wipes out the population.  There’s lots of action and twists to keep you reading, but there are also some lulls in the action that give you a chance to breath and prepare yourself for the next part.  It’s a story that I couldn’t stop thinking about either.  When I wasn’t reading I was wondering what was happening to the characters and how the book was going to end.

Finn’s story takes place in the aftermath of a virus that has wiped out a huge percentage of the population.  The virus affected females mostly so it is mostly males that have survived.  Gangs of men, called Wilders, wander the countryside and control the north where Finn lives.  With a lack of females around to keep them in check these men have lost their humanity and have become violent and ruthless.  You certainly don’t want to bump into them!  Finn has hidden himself away in his house, with a secret store of food, gas, and other supplies, and he and his dog, Rowdy, have survived by themselves fine.  However, when Rose turns up, she brings trouble to Finn’s door and his quiet life is disturbed.  Being the kind of guy that he is though, Finn has to help Rose, both to help her hide and recover and to help her find her sister, Kas.

The Road to Winter reminded me of other books that I’ve really enjoyed, including one of my favourite books, Patrick Ness’ The Knife of Never Letting Go.  The tone of the book felt quite similar, as Finn has to try and help the girls escape the clutches of the violent men who want to harm them.  There is the suspense of them evading capture but not really knowing if they’ll be able to outrun them.  The other similarity to The Knife of Never Letting Go that I really liked was the relationship that Finn has with his dog Rowdy.  Rowdy is his constant companion and is incredibly loyal, much like Todd and Manchee.  The story also reminded me of Gary Paulsen’s Hatchet because it’s all about Finn’s survival on his own, becoming aware of the land and the ocean to find hidden trails to get around and hunt for food.

I loved Mark’s characters too, especially Finn.  While the other males have lost their humanity, Finn has held onto his and leaves the safety of his home to go out and try to find Rose’s sister.  He cares for the girls and is willing to do anything he can to protect them and keep them alive.  I loved the special moments of hope that Finn shared with the females in the story.  Even with everything that was happening to them they still managed to laugh and enjoy having full stomachs.

My only complaint with The Road to Winter is that now I have to wait to find out what happens next.  I need to know what happens to these characters and whether they can find some peace eventually.  The book comes with a money back guarantee but you are certainly guaranteed a great read and I highly recommend The Road to Winter.