Win a signed copy of Stray by Rachael Craw

Rachael Craw’s addictive sequel to Spark, Stray, was released yesterday and I had the pleasure of helping Rachael to launch it in Christchurch last night.  It was a great launch with heaps of Spark fans! You can read my review of Stray here on the blog.

Thanks to Walker Books Australia I have 5 copies of Stray to give away, and thanks to Rachael they are all signed.  To get in the draw to win a signed copy of Stray just email bestfriendsrbooks@gmail.com with the subject line ‘Stray’, along with your name and address.

Rachael’s Spark Trilogy takes us in to a world of genetically engineered humans and the sinister organisation that rules their lives.  In Spark, Rachael introduced us to Evie, an ordinary teenage girl, whose life changes dramatically when her mutant DNA is sparked.  Evie is overtaken by the urge to protect her best friend Kitty.  We learn that she is a Shield, the result of a decades-old experiment gone wrong, and bound by her DNA to defend Kitty from the Stray.  Evie develops special abilities that help her to carry out her role, including increased speed, strength and attractiveness.  These abilities are only heightened by Jamie, Kitty’s striking brother.  Spark follows Evie as she hones her abilities in the hope that she is ready when the time comes to defend Kitty and take out the Stray.  Rachael reveals tantalising details about the sinister Affinity Project and its aims, but it is not until book two, Stray, that we discover more about them and the people behind the organisation.

It’s hard to remember hating anything as much as I hate Affinity; a bone-deep loathing for the faceless unknown and the concrete walls of my own DNA. Evie is a Shield: designed to kill in order to protect, and the Affinity Project have finally come for her. But Evie isn’t ready for the sinister organisation to take control of her life, her body, her mind. She isn’t ready to follow their rules about who may live and who must die – not when it condemns the innocent. She has one option: risk losing everything and everyone – including Jamie – and run.

Spark and Stray are incredibly addictive stories!  I got totally swept up in the stories and had to read every second that I could so that I could find out what happened.  As a librarian and a huge book lover I read so many great books but there are only a few that really stand out, and Rachael’s books certainly have for me.

The second books in a trilogy often lack something and can seem like they’re just filling in time before the dramatic conclusion.  Stray, however, is an epic sequel!  Rachael had me hanging on for dear life on this roller-coaster ride.  The action is almost non-stop, with Rachael giving you the chance to catch your breath briefly (with a touch of comedic relief), before racing ahead again.  Spark was full of plenty heart-stopping moments but Stray takes it up a notch.  There were times when I couldn’t take the suspense.  It’s this feeling that just keeps you reading so you can know the answers.  It was the science fiction aspect of the story that grabbed me with Spark and we delve more in to the shady world of genetic engineering in Stray.  Rachael takes us inside the Affinity Project and we meet the men and women of questionable ethics that are behind the organisation.

It’s not only the action of the story that I love about Rachael’s books, but also the characters.  You know that when you can both love and hate a character that they’re very real.  While a lot of Rachael’s readers are swooning over Jamie, I myself have a crush on Evie.  Evie is quite simply HOT!  I’m sure Rachael puts Evie in a Lara Croft costume just for her male readers.  Looks aside, there are times that I marvel at Evie’s actions and times that I want to shake her by the shoulders in frustration.  Evie’s relationships change quite dramatically in Stray, and not just with Jamie.  Rachael also introduces us to some great new characters who are part of the Affinity Project, including Knox and Tesla.

Rachael’s books are young adult sci-fi at its best and they can stand proud beside the likes of Hunger Games, Divergent and The Maze Runner. Rachael’s fan base will grow hugely with the release of Stray, and like me they will be desperate to read the conclusion of the trilogy when Shield is released next year.  Get your hands on a copy now.

One week until Stray!

If you’re a fan of Rachael Craw’s Spark, you’ll know that there is only a week until the second book in the series, Stray, is released.  If you haven’t read Spark, you absolutely need to go and grab a copy now so that you’ll be up-to-date with the story before it continues in book two.  I’ve just re-read Spark to prepare myself for Stray, so Rachael’s brilliant story and characters are fresh in my mind.  I have to know what will happen to Evie, her family and friends, and what the repercussions will be from the events of Spark.  It is such an action-packed, edge-of-your-seat read and Stray is sure to be more of the same. Spark is one of the best YA science fiction books I’ve read and it’s even better knowing that Rachael is from New Zealand!

It’s hard to remember hating anything as much as I hate Affinity; a bone-deep loathing for the faceless unknown and the concrete walls of my own DNA. Evie is a Shield: designed to kill in order to protect, and the Affinity Project have finally come for her. But Evie isn’t ready for the sinister organisation to take control of her life, her body, her mind. She isn’t ready to follow their rules about who may live and who must die – not when it condemns the innocent. She has one option: risk losing everything and everyone – including Jamie – and run.

I’m super excited to be helping Rachael Craw launch Stray in Christchurch next Tuesday night!  I’m looking forward to meeting Rachael, hearing all about Stray and getting my book signed.  If you’re in Christchurch or near-by you could also come along too.  Here is the invitation to the launch: 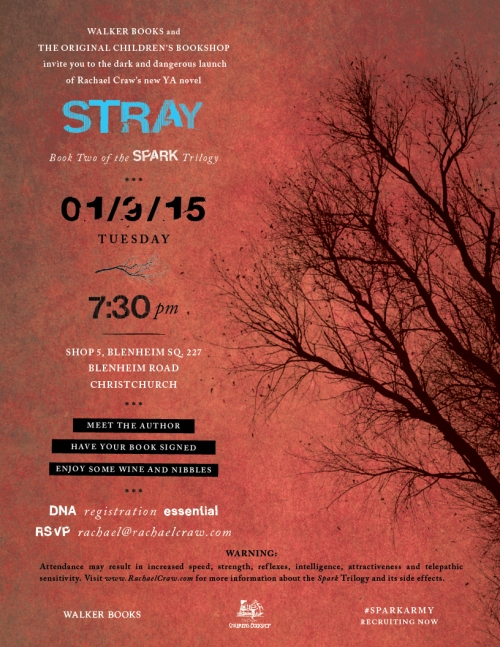 If you can’t get to the book launch I have some fantastic news for you!  Thanks to Walker Books Australia I have 5 copies of Stray to give away here on the blog.  I’ll ask Rachael to sign them so I’ll have 5 SIGNED copies to give away.  Keep an eye out on the blog next week for your chance to win.

Check out Rachael Craw’s website for more info about Spark, Stray and Rachael herself.