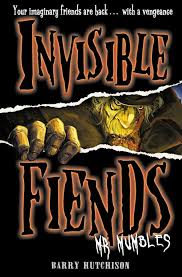 Did you have an invisible friend when you were younger?  If you did you probably can’t remember what they looked like now.  Kyle had an invisible friend when he was younger whose name was Mr Mumbles.  Mr Mumbles lived in the loft and would come and tap on Kyle’s bedroom window when he wanted to play.  Kyle had completely forgotten about him until, one night, Kyle hears the tapping on his window.  This time though, Mr Mumbles doesn’t want to play, he wants to kill Kyle and he’ll stop at nothing to do so.  With the help of a mysterious girl called Ameena, Kyle races to escape his invisible fiend.  Kyle realizes that the only way to defeat Mr Mumbles is to use the thing that created him – his imagination.

Mr Mumbles is the first in the series of Invisible Fiends books by Barry Hutchison.  The second book, Raggy Maggie is also out, with the third book due soon.  These books are great for anyone who likes creepy horror stories, especially fans of Skulduggery Pleasant.  They’re creepy, gruesome, suspenseful and action-packed.  Invisible Fiends is definitely my new favourite series!   Recommended for 9+ DON’T READ AFTER DARK! 10 out of 10

One thought on “Scare yourself silly with the Invisible Fiends”