The wonderful people at HarperCollins New Zealand sent me a very exciting email today about Skulduggery Pleasant.  Only 219 days until the, as yet untitled, Skulduggery Pleasant Book 8 is released!  Read on for more info and to view Tom Percival’s temporary cover.

If you’ve been following Derek’s blog, you’ll know that he has written a third of Book Eight already. In fact, he’s cracking on with it at such an amazing pace that we can now officially confirm that Skulduggery Pleasant Book Eight will publish on 29th August 2013.

Derek will reveal the title on his blog soon (http://dereklandy.blogspot.co.nz/) – just another reason to check the blog page regularly. That, and he sometimes posts funny pictures of cats.

Nor will that be the last exciting reveal of the spring, because the jacket will be revealed sometime after that, once artist extraordinaire Tom Percival has worked his usual magic.

In the meantime, here’s a lovely holding image, to keep you going: 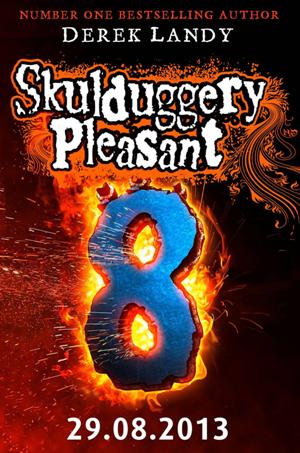 And start counting down the minutes.