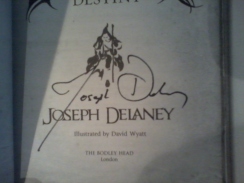 We were lucky enough to have Spook’s Apprentice author, Joseph Delaney, visit us in Christchurch this week.  I’ve been a huge fan of Joseph’s ever since the very first book in the series was released in 2004 so it was great to hear all about the series from the man himself.  It was great to watch the children in the audience reacting to Joseph’s stories and the creepy pictures from his books.

Thanks to Random House New Zealand and Joseph Delaney I have 4 signed Spook’s books to give away.  Four lucky readers will win a signed book each.  All you have to do to get in the draw is enter your name and email address, and answer this question: Who is your favourite character or creature of the dark in the Spook’s series? Competition closes Thursday 28 February (NZ only).

Thanks to everyone who entered.  The winners are Ali, Loraine, Julia and Tokhuor.