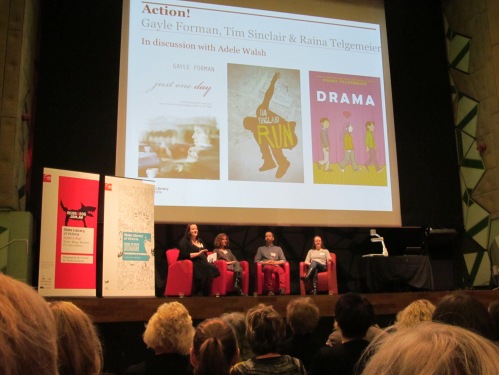 The first question for the authors was why do they depict the teen experience? What is it about YA that appeals to them? I guess I’ve always just thought that it was the story they wanted to write (and this is apart of it), but they gave some great reasons.  Tim said he thought grownups were boring because they slowly angst about things that they can’t change.  Raina remembers every detail about her teenage years so it’s easy to write about it.  Alot of these details of her teenage life makes it into her books.  Gayle writes ‘about young people, but not young stories’ and she said that writing for teens was a way to relive her teenage years.  Characters between the ages of 17 and 22 often invade her brain so she has to write about them.

Each of the authors felt that they had different responsibilities as a writer of books for teens.  Gayle said that it’s important to ‘tell an emotionally authentic story.’  Raina believes that it’s important to write books for teens who don’t enjoy reading.  It’s her responsibility to hook those teenagers who haven’t ‘found’ books yet.  It was at this point that Gayle talked about the importance of librarians and came out with one of my favourite lines of the conference, ‘Librarians are crack dealers.’ It’s our job to get teenagers addicted to books and coming back to the library to get their next fix.

There was also some discussion about labels. Raina hates the way that people dismiss her books as children’s or YA, or when they say it’s ‘just a comic.’ Tim hates the ‘poet’ label.  He wouldn’t want his books (which are verse novels) put in the poetry section of a bookshop because ‘that’s where books go to die.’ When they were asked if YA is a genre or a readership, Tim quickly replied that YA is ‘just awesome!’

The next books they’re working on are: