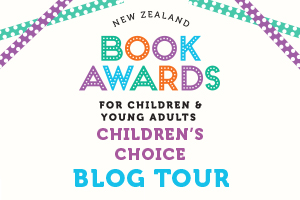 Dragon Knight: Fire!, written by Kyle Mewburn and illustrated by Donovan Bixley, has been voted for by kids all over New Zealand as a finalist in the Children’s Choice Junior Fiction  category. Dragon Knight: Fire!  is also on the judge’s finalist list. Kyle and Donovan have collaborated previously, on the best-selling Dinosaur Rescue series.

Central Otago-based Kyle Mewburn has form on his side in the Children’s Choice game, having won this prestigious award twice previously, with Kiss Kiss! Yuck Yuck!, and Melu , both illustrated by Ali Teo and John O’Reilly.

I don’t usually let my ideas float around in case they escape – or some other sneaky author steals one. My ideas are kept securely locked up in a deep, dark dungeon in the bottom of my brain. Unfortunately ideas can be very stubborn sometimes and refuse to reveal their secrets, no matter how nicely I talk to them. So generally I have to resort to torture.

I decided to write my Dragon Knight series because I knew lots of fans of Dinosaur Rescue would be very angry if I didn’t write a new series soon. My publisher wanted a series with dragons, but I wanted to write about a boy who goes to Knight School (I can never resist a pun. Indeed, some of my best stories have started as a simple pun!). Luckily ,dragons and knights go together perfectly.

The journey was relatively smooth sailing. Apart from a few editorial tweaks the story went through the entire publishing process relatively unscathed. The only hurdle was rewriting a couple of the “fact” boxes because they apparently “weren’t funny enough”. The biggest challenge was drawing the pictures. Luckily, I had nothing to do with that.

I don’t think it’s at all helpful to imagine yourself “tailoring” a story to any age group. That suggests any writer can write for any age group through a process of careful selection. I don’t actually agree that’s the case. The process is more organic than that. Either you can access your inner child or you can’t. If you can, then the stories tend to evolve naturally and take on a life of their own. If you can’t, then it’s no point really trying because any story you write will be prescriptive and fail to touch the reader. The only “tailoring” is actually more along the lines of editorial tinkering, such as debating the appropriateness of specific vocabulary or sentences structures.

Dragon Knight – Fire! is dedicated to Rio. I met Rio’s mum when I was at the Leipzig Book Fair – she was working for the NZ embassy at the time. She told me Rio was a super-keen reader, so I gave her some Dinosaur Rescue books. Rio loved them and started writing to me. When I finally met him a few years later I’d just finished writing Fire!, so I gave it to him to read. His verdict: “This is going to be HUGE. But make sure you include plenty of lists. Kids love lists.” So I decided to dedicate it to him right on the spot!

Indeed. I’d recommend my entire Dinosaur Rescue series and the other three episodes of Dragon Knight.

When I’m not writing I’m either eating, building or pottering around my garden. When you write full-time it’s always good to do something in-between which doesn’t involve too much thinking. You can let your mind wander so new ideas can sneak up on you. Besides, if I didn’t do something involving physical activity I’d be hugely fat in no time because I really do love eating. 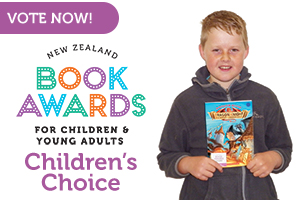 If you want to know more about Kyle, check out his website here: http://kylemewburn.com/

If you want to know more about Donovan, check out his website here: http://www.donovanbixley.com/

For reviews of Dragon Knight: Fire! and its sequel Rats!, check out the Booksellers NZ review here: http://booksellersnz.wordpress.com/2015/06/12/book-review-dragon-knight-fire-and-dragon-knight-rats-by-kyle-mewburn-and-donovan-bixley/.

This is day eleven of the blog tour featuring each of the finalists in the Children’s Choice category of the awards, and the first day featuring junior fiction.

Yesterday’s feature was Marmaduke Duck and the Wide Blue Sea, by Juliette MacIver and Sarah Davis, both of whom were featured on  http://thriftygifty.blogspot.co.nz/.  Tomorrow’s feature will be a second junior fiction title, 1914: Riding into War, by Susan Brocker, featured on NZ Book Council’s blog: www.booknotes-unbound.co.nz.

One thought on “2015 New Zealand Book Awards for Children and Young Adults: Interview with Kyle Mewburn”