Liam just wants to go out running with his mates – it’s not long till the Junior Great North Run, and there’s training to be done. But Mam needs him today, to help old Harry clear out his house. Harry knows a thing or two about running. When he was a lad, he says, he ran all the way from Newcastle to South Shields. “But Harry,” says Mam, “that’s thirteen miles!” Harry grins. “Different times,” he says. This is the story of that day: of sweltering heat, clattering boots, briny sea air and the heavenly taste of ice cream; the day when Harry and his pals ran and ran and ran through the blazing sunlight all the way to the sea.

Peep through the holes in this delightful fairytale adventure.

“Once upon a time, there was a troll,” says Lucy. But Mr Barker isn’t listening. He’s off on his own fairytale adventure. Who will he and Lucy meet and will their story end happily ever after?

Illuminae: The Illuminae Files 1 by Amie Kaufman and Jay Kristoff (Allen and Unwin)

The year is 2575, and two rival mega-corporations are at war over a planet that’s little more than an ice-covered speck at the edge of the universe. Too bad nobody thought to warn the people living on it. With enemy fire raining down on them, exes Kady and Ezra – who are barely even talking to each other – are forced to fight their way onto the evacuating fleet, with an enemy warship in hot pursuit.

But the warship is the least of their problems. A deadly plague has broken out and is mutating, with terrifying results. The fleet’s AI, which should be protecting them, may actually be their enemy; and nobody in charge will say what the hell is going on. As Kady hacks into a tangled web of data to find the truth, it’s clear only one person can help her bring it all to light: the ex-boyfriend she swore she’d never speak to again.

The Grunts on the Run by Philip Ardagh, illustrated by Axel Scheffler (Allen and Unwin)

Over the years, the Gruntshave made more than a few enemies. But fortunately they’re all safely behind bars. Or are they? There’s been a prison break-out, and three of them are after REVENGE. It’s time for the Grunts to go On the Run. This last book brings back some familiar faces from the series and solves a couple of mysteries too.

The Imaginary by A.F. Harrold, illustrated by Emily Gravett (Allen and Unwin)

Rudger is Amanda Shuffleup’s imaginary friend. It’s a funny old life, not actually being there, but someone’s got to do it.

Nobody else can see Rudger – until the sinister Mr Bunting arrives at Amanda’s door. Mr Bunting hunts imaginaries. Rumour says that he eats them. And he’s sniffed out Rudger.

Soon Rudger is alone, and running for his imaginary life. He needs to find Amanda before Mr Bunting catches him – and before Amanda forgets him and he fades away to nothing. But how can an unreal boy stand alone in the real world?

Tiger claims that stripes are best. Leopard insists that spots are tops. Their squabble turns into a quarrel; the quarrel becomes a battle; and, by lunchtime, the jungle is a complete mess.

Monkey calls a meeting of the Jungle Council and all the animals put their heads together to come up with a plan. Their cunningly stylish way of resolving matters will bring out the best in everyone . . . well, almost everyone. 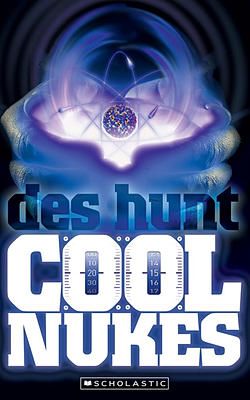 Professor Walter Mayhew has always been weird, but an explosion in his backyard lab sends him over the edge. Soon afterwards he disappears in bizarre circumstances. Then three of his youngest and cleverest students – thirteen-year-olds Max, Jian Xin , and Cleo – start getting cryptic messages which seem to be the plans for a nuclear device – one that could solve all of mankind’s energy problems.

At first they welcome the opportunity to make something spectacular for the upcoming ExpoFest science fair. But this machine, if it works, will be worth a fortune, and Max soon becomes the target of a criminal gang. As the day of the ExpoFest approaches, the pressure increases until Max is forced to choose between completing the task or saving the life of his best friend.

When the Bloodtree loses its last leaf, there will be no more stories in the Silvering Kingdom . . .

The Silvering Kingdom is the home of fairy tales but the kingdom and all those within are in danger of vanishing because the Bloodtree – the source of all stories – has been poisoned.

In Book 2 of the series, Bragonsthyme’s story is frozen in time. It is up to Abigail (Spindale) and Flint to track down the story’s happy ending by finding the dark master Treolle’s last words, thus helping the Bloodtree to heal.

The roly-poly baby rolls through the house, past her cat, her sleeping grandad, her mum and older siblings in the kitchen, then outside into the elements and the autumn leaves, and then back into her mother’s arms for her evening bath. The Bad Guys are back with a daring plan to rescue 10,000 chickens from a high-security cage farm! But how do you rescue chickens when one of you is known as The Chicken Swallower? Join The Bad Guys as they return for more dodgy good deeds with a new member of the team. And watch out for the super villain who might just be the end of them! Good deeds. Whether you like it or not…

LIQUIDATOR! The brand-new, delicious and wildly popular energy drink. “For those who wanna win!” The company that makes it is set to earn a fortune, with its global launch climaxing at an international rock concert that will SHAKE the planet. The only problem?An innocent child is dying. Meet Vicky and her class-mates – their work experience is about to spin totally out of control as they uncover a secret that could change the world. And put them all in mortal danger.

Olive of Groves by Katrina Nannestad, illustrated by Lucia Masciullo

Olive has always dreamed of attending boarding school, but Mrs Groves’ Boarding School for Naughty Boys, Talking Animals and Circus Performers is not what she expected. To tell the truth, dear reader, it is not what anyone expected!

Olive, however, is clever, sweet and kind, and soon gains the loyalty and devotion of three rats, a short-sighted moose, a compulsive liar and a goose who faints at the sight of cherries.

But will friendship and wits be enough when Pig McKenzie puts his Truly Wicked Plan into gear? Or will Olive be cast out of Groves forever?