Today I’m joined by Glenda Millard, author of the amazing new YA book, The Stars at Oktober Bend.  Glenda’s book, A Small Free Kiss in the Dark, is one of my favourite books and I was very eager to read her latest book.  It is an absolutely amazing story with unforgettable characters (you can read my review here).

Check out my interview with Glenda to hear about her inspiration for The Stars at Oktober Bend, why she wrote her story in the way that she did, and her haunting characters. 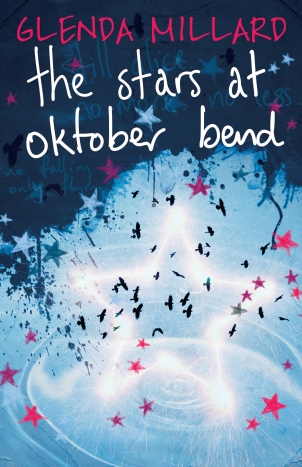 My strong point as a writer is certainly not planning! I usually begin writing with a singular idea and develop it as I go. The initial idea for ‘The Stars at Oktober Bend’ came from a brief newspaper article about a homeless girl who sang and in doing so had earned herself a scholarship to study music at a prestigious conservatorium.
So I began writing with the vague notion of telling the story of someone who sang as a means of escaping a traumatic past. But as often happens, once the characters began to evolve and further information came to hand, my story changed direction.
One of the bigger impacts on the change of direction for ‘The Stars at October Bend’ was that my daughter was studying for her Masters in Speech Pathology and I became aware of language disorders, their causes and effects. That led me to thinking about what it would be like to be unimpaired intellectually, but to struggle with expressing ideas verbally.

Literary characters have to live and breathe for me. I have to be totally engaged with them and believe in them otherwise I can’t imagine how other people will. I feel the same as a reader – if I have no emotional connection with the characters, then it doesn’t matter how good the plot is, there is nothing to keep me motivated to read. So I suppose the answer to your question is ‘yes’ because I think of the characters as  living people for so long, that it’s hard to forget them once the book is finished.

I’m not sure I can tell you the answer to that. I imagine that creating a literary character and acting the part of one in a play or movie might be similar in some ways. I only know that I have to try to feel what my characters feel and then express it in a way that readers will relate to – not only in an intellectual way, but an emotional one.

I don’t have any brothers, but I invented one who I hoped would seem plausible – Joey with all his human faults and foibles, but staunchly loyal and faithful.

I used prose, verse, lower case letters and minimal punctuation as an acknowledgement of the difficulty Alice had in explaining longer, more complex thoughts in single sentences.  As Alice herself says, she began by writing lists, these developed into verse and then as the story progresses, so too does Alice’s ability to communicate more complex, cohesive thoughts. One of the things Alice and I love about verse is that each line can give a small foretaste of what is to come – a kind of prompt or reminder. So for Alice, verse became an aide to expression, something that helped her string longer passages of thought together in small bites.

Anyone who can read! The age of the reader is in some ways irrelevant to me. Even when I write picture books, I don’t presume that only children will read them. I am always looking for the best way to tell my story, so that whoever reads it will enjoy it for some reason or other. Perhaps the story itself or simply the way it is told. Each genre has its own challenges and pleasures. Picture books, for example, generally demand very concise writing. For me, writing across a broad range, from picture books through to novels is a way of keeping my writing fresh and not allowing myself to get too comfortable or predictable.

Among the many on my list, David Almond, a UK writer, has been for many, many years, my rock-star author. My not-so-secret wish is to have David endorse one of my books!  In Australia, I am a great admirer of Ursula Dubosarsky’s beautiful writing and have had the privilege of meeting her on a number of occasions.

One thought on “Interview with Glenda Millard”