I’ve stuck with Skulduggery and Valkyrie through all their battles, near-death experiences and the countless times they have saved the world.  Like many Skulduggery fans I thought I’d seen the last of these characters that I had come to love, but Derek Landy is always full of surprises.  He has brought Skulduggery and Valkyrie back again, with new characters to welcome as friends.  Resurrection is the latest book in the series and I was so excited to return to this world and these characters that Derek created. 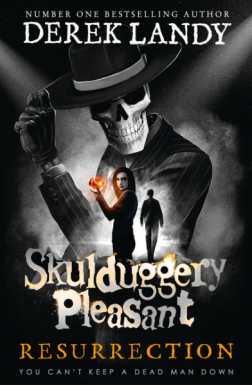 A lot has changed. Roarhaven is now a magical city, where sorcerers can live openly. Valkyrie Cain has been out of action for years, recovering from the war against her alter-ego Darquesse, which nearly destroyed her and everyone else.

Some things never change though: bad people still want to do bad things, and Skulduggery Pleasant is still there to stop them.

When Skulduggery learns of a plot to resurrect a terrifying evil, he persuades Valkyrie to join him for just 24 hours. But they need someone else on their team, someone inconspicuous, someone who can go undercover.

24 hours to save the world. One sharply-dressed skeleton. One grief-stricken young woman. One teenage boy who can’t remember which class he’s supposed to be in.

Resurrection is a return to classic Skulduggery Pleasant.  All the things that I loved about the early books are here in Resurrection – the witty banter, great villains and humour.  The humour especially was lacking in the last few books because of the whole end of the world thing that was happening.  The relationship between Skulduggery and Valkyrie is never going to be the same as what it was at the start of the series but you can see their relationship strengthening again.  Resurrection is a return to the good old days of Skulduggery and Valkyrie, even though so much has changed in their world.

Valkyrie has been out of Ireland for 5 years, hiding away in a cabin in the wilds of America.  She had a lot to deal with after Darquesse took her over and she killed hundreds of people in Roarhaven.  At the start of the book she has moved back to Ireland and is living in Uncle Gordon’s old house.  As she is settling in her old pal Skulduggery turns up and asks her to come back into the fold and join him, just for 24 hours.  Valkyrie doesn’t feel that she is ready, mentally or physically, to be back doing Sanctuary business again but she reluctantly agrees.  It’s not long before she finds herself back in trouble again, with people who want to hurt and kill her.  Into the picture comes Omen Darkly, the brother of The Chosen One, Auger Darkly.  Omen is a kid who fades into the background, not just at school but also at home, as his parents give all their attention to Auger.  When Omen gets the chance to join his idols, Skulduggery and Valkyrie, he thinks all his dreams have come true.  Omen soon finds himself deep in trouble with some very bad people and it’s up to Valkyrie to get him out safely.  After a run in with a nasty piece of work called Smoke, Skulduggery has been corrupted and will do anything he can to kill Valkyrie.  This is one action-packed story!

I really enjoyed this introduction of Omen Darkly. He is going to play an important part in the coming books and you know that he will grow up fast, just as Valkyrie had to do.  A lot of my favourite characters from the series have been killed off but I’m sure there will be some great new characters to come.

Resurrection made me want to go right back to the start of the series and enjoy them all over again.  I feel like you would still have to have read the other books in the series to fully understand what is happening in Resurrection.  I’ll certainly be promoting the first few books in my library.