Starlight Stables is a wonderful new series about three horse-crazy girls from New Zealand author Soraya Nicholas.  Soraya grew up reading the Saddle Club books and dreaming of owning her own pony.  Now Soraya owns her own horses and writes the kind of books she loved when she was a kid.

These books are perfect for those horse-mad girls who are always looking for more books about horses, especially fans of Saddle Club and Stacey Gregg’s books. The stories are set in Australia but NZ girls will really relate to the characters. They don’t just focus on horses though.  There is friendship, competition, rivalry, horse thieves and bush-fires.

The first four books in the Starlight Stables series are all out now, so young readers can get hooked.  They don’t have to read the books in a particular order which is great. Here are the covers and the blurbs for each book.

Poppy is thrilled to be back doing the one thing she loves – riding horses at Starlight Stables – especially when her aunt and uncle make all her dreams come true with a gift of her very own horse. But there’s a catch… Poppy must look after the new scholarship girls. Will the bold and troublesome Milly and shy, sensible Katie be the pony-mad friends she’s always hoped for?

When horses go missing from the local farms, Poppy worries about Crystal, her new horse. Will the girls be able to protect their ponies from the horse thief and find the missing horses at the same time?

Horse-mad friends Poppy, Milly and Katie are overjoyed to be back at Starlight Stables and spending every second with their new ponies – riding, training and having fun while preparing for their first big Pony Club competition. But when a rival competitor arrives one day to train with them, trouble seems to seek the girls out at every turn. Is it just coincidence? Or is someone trying to sabotage the three friends’ chances of winning?

Can Poppy, Mily and Katie expose their rival’s risky antics in time to save their chances at the gymkhana? 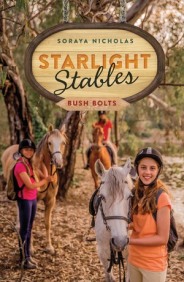 Poppy is thrilled that her best friend Sarah is finally coming to visit Starlight Stables. She is sure that Sarah will love it as much as she does – especially Poppy’s beautiful pony, Crystal, and her horse-mad friends, fiery Milly and sweet Katie. But it soon becomes clear that Sarah doesn’t share Poppy’s love of horses and riding – in fact, she’s more interested in helping Poppy’s uncle with some bushfire-injured animals.

When a bushfire erupts nearby, Poppy finds herself fighting not only to save her friendship but also to save her beloved Starlight Stables. Will she lose everything she loves?

Poppy’s world is falling apart. Her aunt and uncle have had an ominous visit from the bank because they have lost an important riding sponsor. It means they might have to sell Starlight Stables. Could Poppy lose everything – her beloved Starlight Stables, her beautiful horse Crystal, her friends Milly and Katie, and even her aunt’s Olympic dreams?

Poppy is determined to do everything she can to help. She just has to win the upcoming show-jumping competition so she can give them the prize. But it means she will have to jump higher than she ever has before to save everything she loves.

Win a set of the Starlight Stables books!

Thanks to everyone who entered!  The winner is Carole.