Everyone loves a good story about a cool babysitter or nanny, like Mary Poppins, Nanny McPhee or Nanny Piggins.  Now there is a new character to add to that list, the larger-than-life Marge.  Jake and Jemima’s life becomes incredibly exciting when Marge arrives. 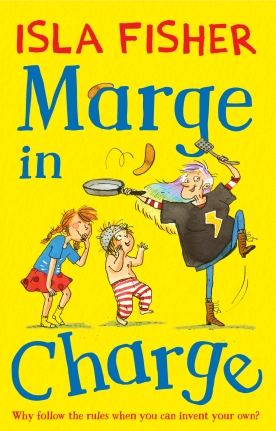 Meet Marge, the mischievous babysitter with rainbow hair who loves to make a mess and bend the rules . . . At dinnertime Chef Marge cooks up chocolate soup, and at school Marge the Muscian conducts a chaotic concert in the playground!

Jake and Jemima have brilliant fun with their new babysitter, but will they manage to tick off all the jobs on Mummy’s list?

Marge in Charge is a hilarious, entertaining collection of stories about the magic that Marge brings to Jake and Jemima’s life. Isla Fisher’s stories about Marge will have children laughing out loud and wishing they had a babysitter who was this much fun.

Jemima and Jake don’t think that Marge is going to be any fun, especially when she turns up at their house looking like a strict old lady.  They have no idea of the adventures that await them.  Marge has so many stories to share and you’re never quite sure which are real and which ones she’s made up. Marge brings out the fun in any situation and makes everything better, from birthday parties to school.  It’s not only Jemima and Jake that fall in love with Marge, all the other kids at school want her as their babysitter too.  There are three stories in this first collection and I certainly hope there will be more stories to look forward to.

Marge in Charge is a perfect read-aloud to share with a class or snuggled up with your kids.  Kids aged 6-10 especially will love Marge and her crazy antics.  The book is illustrated throughout by Eglantine Ceulemans delightful illustrations.  She makes Marge’s larger than life character jump off the page.

Check out this video of Isla Fisher introducing the series: